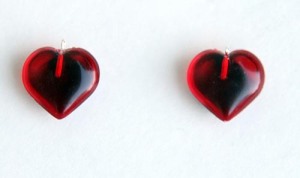 I have always considered there to be two types of magic in the world.  The first, and most important, is Love.  On this Valentines Day, Love is the center of attention, and that is why it is one of my favorite days of the year.

The other type of magic is magnets.  Yes, magnets.  This is an utterly different type of magic from Love, but magnets are magic nonetheless.  I know scientists have all types of theories about magnets, from Maxwell’s equations to quantum mechanics (yes, I Googled it), and I call FIE on all of that!  Magnets are magic, pure and simple.  It is only because they are so commonplace that we have become blind to their magic.  If we were walking down the street and suddenly saw two car tires fly from opposite sides of the street to meet in the middle, we would be startled.  If we saw a tennis ball levitate in mid air, we would be frightened and confused.  But if we see two magnets fly across space so as to touch, we just go “So what?  They’re just magnets!”

What is the point of all this you ask?  Well, I was perusing the aisles at my local discount store and ran across a bag of heart shaped gems.  These naturally piqued my crafting interest, and I bought them.  They just happened to be pretty much the same size as some mini-magnets I had just bought.  The plan came to me in a snap!  What better way to celebrate Valentines Day than combine my two favorite forms of magic?  I would create heart pendants with magnets inside, so that when two wearers got close enough, the hearts would be drawn to each other, fly through space and touch each other.  I couldn’t think of a better crafty project to represent Valentines Day.  And here’s how I did it: 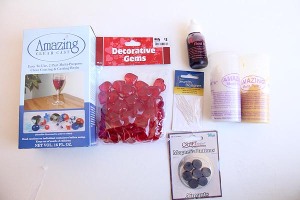 As you can see, the heart gems were just the right size for the magnets 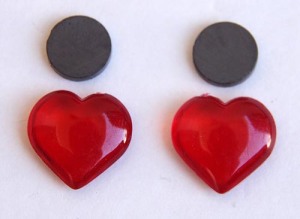 I started by first taking two of the Darice Eye pins and cutting them a little shorter.  They were a little longer than the heart, so I shortened them just enough to firmly embed in the resin I would be pouring. 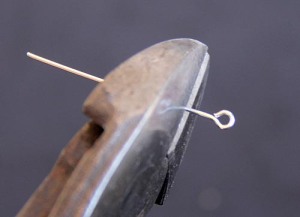 Next it was on to the Alumilite Amazing Mold putty – a two part putty that when thoroughly mixed together would make a beautiful mold in just minutes. 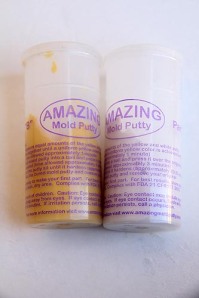 I measured out a ball of each part of the putty so that I would have enough to completely surround the heart gem.

Then I mixed the two halves of the putty together 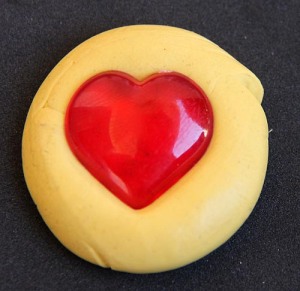 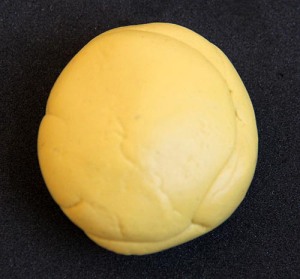 After a few minutes, the mold solidified.  So I made as clean incision along the edge as possible to open it up

Once I peeled it open and removed the heart gem, the cavity left behind was a perfect heart mold

Since I wanted the Eye Pin to be embedded at the top, middle of the heart, I put a dot where I needed to insert the pin

Next I got my resin and resin dye 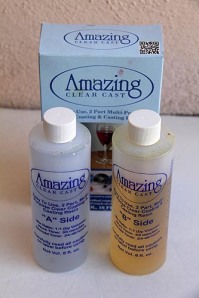 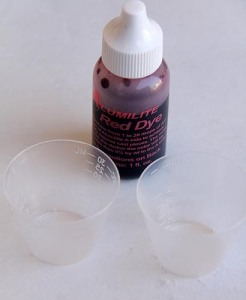 I poured out equal amounts of the Part A and Part B of the resin, and I added a few drops of dye to one of them 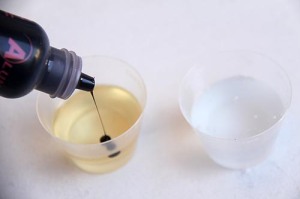 Then I thoroughly mixed them together 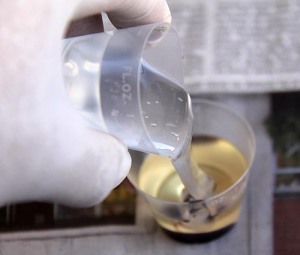 Because the next few steps involved two hands, and I had no one to help (and because it got very sticky) I could not shoot photos of every little step.  But here is what I did.  I opened up each mold and plopped a magnet inside the heart shaped cavity.  I then ran an Eye Pin through the dot I had drawn on each mold to that it lined up with the very top of the heart shape.  Then I poured resin into the cavity, making sure it got in everywhere and surrounded the magnet.  This was messy, and I over-poured just to make sure there were no air pockets.  Then I closed up the molds.  Extra resin leaked out the seam, which is why I wore rubber gloves!!  Then I left the molds to dry.  I always create more resin than I need, and I leave it in the mixing cup.  That way I can test the resin in the cup for hardness, and know that my resin in the molds is also hard.

After a day of drying, I ripped open the molds (they were only one-use molds anyway) and released my resin hearts.  I cleaned up any extra resin and gave them a little polishing.

You can see the Eye Pins embedded in the resin, in front of the magnets, which are also embedded.  The next step was to add a string (or chain, whatever) through the Eye Pins so each could be worn as a necklace.

And when they get close enough…..